INTRODUCTION: Obstructive sleep apnea (OSA) is a respiratory sleep disorder. Many of these patients also exhibit autonomic alterations which can be observed through heart rate variability (HRV). Currently, one of the treatments for apnea is continuous positive airway pressure (CPAP).
OBJECTIVE: To observe OSA patients treated with CPAP exhibit HRV changes at medium and long treatment period.
METHODS: This is an integrative literature review conducted in May of 2018. The databases used for this research were PubMed, Scopus, Scielo and Pedro, the keywords used were “heart rate variability”, “obstructive sleep apnea” and “CPAP”. In this review was included original, published, randomized and non-randomized articles, released in the English language, before and up to April 2018, which specified the effects of CPAP therapy in autonomic dysfunction through the analysis of the HRV of patients diagnosed with OSA after at least one month of therapy.
RESULTS: The research of the literature produced 113 articles. After excluding duplicates and applying the inclusion and exclusion criteria, 8 articles were selected for this review.
CONCLUSION: It was concluded that CPAP therapy is related to change in heart rate variability in patients with obstructive sleep apnea. 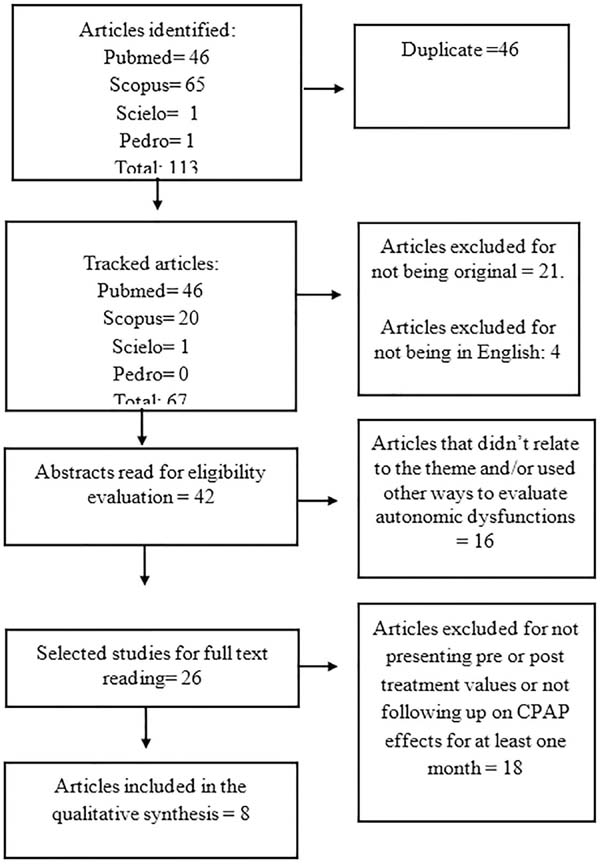 Obstructive Sleep Apnea (OSA) is a sleep-related breathing disorder that occurs through the occlusion of the upper airways1, resulting in greater arousal and reduction of oxygen saturations during the sleep period2.

It is a frequent pathology, the prevalence of which may vary between 10% and 50% depending on the population, considering age group or gender2. The largest epidemiologic study on sleep undertaken in Brazil showed that 32.80% of 1042 volunteers researched had obstructive sleep apnea syndrome3.

Currently, treatment through continuous positive airway pressure (CPAP) is suggested as one of the therapeutic options for OSA patients, with an indication considered of moderate quality of evidence4. Its efficiency is seen in the reduction of the apnea index, improvement in oxygen saturation, daytime sleepiness, and patient quality of life, in moderate to severe OSA5.

There is a risk of cardiovascular disease amongst OSA patients, and the factors for this are complex. It is believed that there is interaction between oxidative stress, endothelial alterations, coagulation-fibrinolysis balance, systemic inflammatory processes, and autonomic alterations caused by the moment of apnea and sleep change, alongside external factors6. This process, thus, may cause a rise in blood pressure, cardiac arrhythmia, arterial coronary disease, atrial fibrillation, cerebrovascular diseases, and cardiac insufficiency7.

The autonomic alterations related to the emergence of diseases are inherent to the alteration of sympathetic activity in individuals with OSA. These alterations are seen in many studies through heart rate variability (HRV). High sympathetic activity is observed in OSA patients, justified by the increase in low frequency (LF) and very low frequency (VLF) domains, and in sympathovagal balance (LF/HF)8. The sympathetic balance is correlated to the severity of the disease, which is determined by the apnea index9.

The aim of this study, therefore, was to observe the changes in HRV, at medium and long treatment period, of patients with OSA treated with CPAP.

This is an integrative literature review conducted following the 6 steps proposed by Mendes et al.10. The follow steps were aim formulation, the definition of data collection, included and excluded criteria, article data research and analysis, interpretation and finally, the manuscript writing.

The research was conducted in May of 2018. The databases used for research were PubMed, Scopus, SciELO and Pedro. The keywords used were “heart rate variability”, “obstructive sleep apnea” and “cpap”, applied according to each databases configurations, with the Boolean indicator “AND”.

For the selection of the included articles, title reading was conducted followed by reading of the abstracts of the manuscripts found. At this stage, the randomized and non-randomized studies that integrate the review were selected. After this selection, the texts were read throughout to observe whether they were adequate to the review’s theme. The selection was conducted by two researches independently, and the items included in the review were agreed upon by both at the end through a new analysis.

In this review were included original, published, randomized and non-randomized articles released in the English language before and up to May 2018, which specified the effects of CPAP therapy in autonomic dysfunction, through the HRV analysis of OSA patients after at least one month of therapy.

The exclusion criteria are composed of non-original articles, such as literature reviews, letters, summaries, case studies and pilot studies or manuscripts that do not address the researched theme. Also, articles without subject apnea degree specified, without a description of the results before CPAP therapy and after the follow-up.

After the selection, a second analytical reading was done, to obtain and register the articles data, patient’s characteristics, main outcome and results that demonstrate the effects (positive and negative) of CPAP use in heart rate variability of OSA patients, through linear and non-linear methods. The aim of this phase was qualitatively synthesized.

After that, abstracts from 42 articles were read, 16 of which were excluded for not using HRV to evaluate the autonomic nervous system or not being related to the theme. Of the remaining 26 articles, 18 were excluded for not accompanying the patients for over a month, not presenting the HRV values pre and post-therapy, analyzing distinct groups with OSA and treated with CPAP with no initial and final analysis of the group’s patients, or for having only graphics as results. At the end, 8 articles were selected to make up the results of this integrative review.

Characteristics of the studies

Table 1 shows the methodological characteristics of the selected studies. Most of the articles found are cohort studies. Two of the studies have a control group, and only one of them proposed randomized patients for the intervention or stratification groups. Patient follow-up varied between 1 and 18 months. All studies used polysomnography for sleep study or evaluation of apnea presence. The HRV analysis was done mostly by electrocardiography. The method of analysis employed by the articles were linear; 3 of the studies used frequency domain analysis, 1 used time domain analysis and 4 used parameters from both domains.

On Table 2 the general characteristics of the selected samples may be observed. one hundred and eighty-six patients composed the CPAP treatment groups; the control and intervention groups were not accounted for. Most patients in the study were men (138), the higher mean age was 61.4±8.1 and the smaller was 31.2±1.2 years. The patients were classified by severity of their apnea as severe or moderate to severe - through the Apnea-Hypopnea Index, the minimum value was 24.3±5.5 and the maximal 60.9±31.7.

Table 2. Characteristics of the sample of selected studies.

Table 2. Characteristics of the sample of selected studies.

The literature shows that CPAP therapy produces changes in the OSA patients’ autonomic nervous system at short, medium and long treatment period. These alterations demonstrate changes in sympathetic and parasympathetic activity, during sleep and vigil. The main parameters changes, in the analysis of time domain and frequency domain, can be observed on Table 3.

Table 3. Changes in HRV after CPAP treatment in OSA patients.

Table 3. Changes in HRV after CPAP treatment in OSA patients.

In the frequency domain analysis, some parameters did not behave the same way after treatment. Low Frequency was lower in 1,2 months11,12 and 6 months13. Contradictorily, after 3 months13,14 and 1 year it was elevated15. The same happened to HF, which was lower after 1 and 3 months11,13,16, but showed itself to be higher after 1 and 2 months, and 1 year12,15,17. The sympathovagal balance after CPAP tends to reduce after therapy12,14,16, although the change is not statistically significant in one study17.

In the Time domain analysis, the SDNN13,16, pNN5015,18, and parameters showed an increase after treatment. Square root of mean squared difference of successive normal-to-normal R-R intervals (rMSSD) showed a change too15,18.

The main finding in this review was that CPAP therapy induces change in OSA patients’ parasympathetic tone, through changes in the HF, SDNN and pNN50. Patients with OSA tend to have a higher vagal tone, as expressed in HRV when compared to the control group18. In these patients, the influence of the vagal tone can be observed through the high frequency domains and components of pNN50 and rMSSD in HRV analysis. There is an indication that CPAP therapy produces significant change in these domains.

At the same time, it is not possible to observe alterations in time domain parameters during the day, although the pNN50 and rMSSD parameters are significantly reduced at night after therapy.

The decrease in sympathovagal balance through the LF/HF ratio during the sleep seems to be related to the decrease in HF. The LF/HF ratio reduced during the day and, as opposed to nighttime, was associated with an increase of HF16. The studies show that even when facing other comorbidities, such as polycystic ovarian syndrome12 or arterial rigidity14, CPAP produces change in HRV, as in other findings related to these diseases.

Conversely, in comparison to other therapies, whereas the weight loss provoked by 1 year of sibutramine15, in 24h analysis, rMSNN and pNN50 increased more during CPAP. During the day, the vagal component (HF) was higher for the CPAP group, as SDNN and SDANN when compared to the first month of therapy. The sibutramine group had no alteration in the LF, HF power and LF/HF ratio components.

Another finding in this review was the decrease in sympathetic activity through LF. It has been observed that in apnea episodes, oxygen decrease results in greater sympathetic nervous system activity at nighttime. These alterations persist at daytime, accompanied by higher nervous tone and higher concentration of sympathetic neuromodulators19.

The method of HRV analysis could provide different results. As observed in Table 1, some analyzed their patients for 24 hours and others for shorter time periods during sleep or daytime with different breathing methods. Considering that apnea episodes happen at nighttime, during sleep, the autonomic alterations can also be more significant during this period. As observed, abnormal breathing culminates in sympathetic activity peaks higher than the vagal ones20.

The review showed that the repercussion on HRV of CPAP treatment for OSA patients has moderate evidence. It demonstrated improvement in Apnea-Hypopnea Index and it also restore patients autonomic function in medium and long treatment time. Although theses benefits, could not be extend to men and women or patients in different age range due the studies characteristic.

The main limitation of this review was that there were few robust studies. It’s important to acquire better scientific evidence of CPAP’s effect in HRV. In this study, only 1 article was randomized11 and 2 with control groups17,18. Furthermore, the different parameters and measurement units adopted by the authors made difficult result comparison.

The studies presented HRV analysis of different period of day and were used different methods of analysis. Also, a third confounding characteristic was de range of apnea hypopnea index. These points could compromise the quality of data and show bias.

CPAP therapy influenced changes in heart rate variability of patients with obstructive sleep apnea. These changes are more significant when analyzing the frequency domain spectrum when compared to the time domain. Changes are also prominent at medium and long treatment period, with meaningful alterations in sympathovagal balance decrease and vagal component (HF) increase.