BACKGROUND AND OBJECTIVE: Comparing the sleep-wake cycle (SWC) and daytime sleepiness in adolescents when they attend morning classes and during school vacations.
METHODS: The sleep-wake cycle was evaluated based on the student's sleep log, and daytime sleepiness was evaluated by the Karolinska Sleepiness Scale (KS). Comparison between these variables was performed with 42 Brazilian adolescent students (14-19 years old) based on a one-week period on schooldays and a one-week period on vacation days. SWC irregularity was evaluated through standard deviation in bedtime and wake-up time on weekdays and on weekends. For statistical analysis, dependent T-test and Repeated Measures Anova were applied (p <0.05).
RESULTS: During the vacation period, sleep irregularity is maintained, but in contrast to the schoolday period, adolescents have a more extended sleep period on weekdays than on weekends. Bedtime and wake-up time are delayed, and sleep duration increases along the week. Sleepiness shows a daily pattern characterized by higher sleepiness levels at wake-up time and bedtime, and during vacations, such levels decrease at wake-up time and at 2:00pm. Moreover, during vacations frequency of naps decreases both on weekdays and on weekends.
CONCLUSION: The morning school schedule is not the sole cause for the adolescent's sleep irregularity. Sleep habits associated with other factors involving the adolescent's socio-cultural context may influence such behavior. It is important to investigate the extent at which sleep schedule irregularity starts to be detrimental to the individual's sleep quality.

Although people show different physiological needs in relation to sleep, social schedules do not take into consideration such needs (1). For adolescents, who usually go to sleep later and wake up later than infants (2,3), starting classes before 08:00am is doubtlessly a problem, and this schedule can be observed in several countries including Israel (4), USA (5), Italy (6), Brazil (7), and Korea (8). The difficulty parents have when waking their children on time to go to school, which is often perceived as as laziness, conceals a problem that has been recurrent among the society, that is, partial sleep deprivation (4-8). We frequently hear reports from parents and teachers about adolescents' excessive daily sleepiness (9-14) coupled with frequent and extended naps (6,10). Other consequences of partial sleep deprivation may include learning difficulties, depressive mood, and behavioral problems (9,14).

Such conflict between social schedules and biological schedules, termed by Wittmann and collaborators as "social jetlag" (15), is considered the major cause for partial sleep deprivation in adolescent students and is associated with irregularity in bedtime and wake-up time schedules on weekdays and on weekends (1,6 8,10,15,17). This happens because on weekends adolescents tend to compensate for the sleep deficit accumulated during weekdays by increasing their night sleep period by 2 hours, in addition to sleeping and waking up later (10,18). Irregularity in bedtime and wake-up time contributes to increased daily sleepiness (17,19) and reduced sleep efficiency (17), and it generates unsatisfactory academic performance (19).

Even recognizing that morning school schedules are the chief cause for adolescents' partial sleep deprivation and sleep schedule irregularities, practicing certain habits close to bedtime limits the adolescent's capacity to adjust to school schedules, thus exacerbating the problem. For example, adolescents usually watch TV, navigate on the internet, study until late at night (20-23), or ingest stimulant substances such as coffee or soda, shortly before bedtime (20). Such behaviors are normally associated with exposure to artificial light, which may further delay the individual's sleep schedule (24). On a study conducted with adolescents, Cortesi and collaborators (25) found that in a sample of 425 students, 34% exhibited sleep hygiene habits associated with a high level of daytime sleepiness and low performance.

Nevertheless, such habits may develop due to a lack of knowledge about behaviors that impact sleep (25), or because the individual chooses to maintain certain habits that are knowingly detrimental to sleep quality, as in the case of individuals suffering from insomnia (26). In a study conducted with university students, Brown and collaborators (27) observed that knowledge about sleep hygiene measures is related to behaviors that contribute to improve sleep quality, such as trying to maintain a regular schedule concerning bedtime. A similar result was observed in adults by Gallasch and Gradisar (28) and in adolescents by Sousa and collaborators (10).

On the other hand, during vacations, when adolescents are free from any school obligations, sleep deprivation on weekdays is reduced or nonexistent, as the majority of adolescents can sleep as much as they wish, according to their physiological needs. Thus, in adolescents who attend morning classes, sleep schedules and sleep duration are different on schooldays and on school vacations. For example, Hansen and collaborators (29) found that adolescents' bedtime and wake-up times are delayed on vacations, and that their sleep period on weekdays increases 120 minutes, and on weekends it increases around 30 minutes, when compared to the first week after classes start. Similarly, Crowley and collaborators (30) observed that during vacations, the initial half sleep period and the beginning of melatonin release occur later when compared to schooldays. In addition, these authors reported that there is a closer correlation between sleep schedules and the beginning of melatonin release during schooldays. That is, during vacations, the adolescents express their endogenous tendency of delaying sleep schedules and extending the night sleep period, reinforcing the internal temporal order that had been disturbed by the effect of social synchronizers, such as school schedules.

Thus, during vacations, the possibility of sleeping later on weekdays is associated with an increase in night sleep duration, and it may reduce irregularity in sleep schedules both on weekdays and on weekends, as well as reduce daily sleepiness. Evaluation of adolescents' sleep-wake cycles during schooldays and during vacations enables an understanding of how school schedules impact adolescents' sleep-wake cycles and on sleepiness. Such evaluation is quite important, as these parameters affect, and often compromise, studetns' performance at school, mainly in the case of students who have partial sleep deprivation. For this reason, the objective of the present study was to compare adolescent students' sleep-wake cycles (SWC) and daily sleepiness on schooldays and on vacation days.

After project approval by UFRN Ethical Committee, 127 students from three high school classes were invited to participate in this study upon signing the informed consent form. Any student included in one of the three classes could participate in the study after it was completed by his/her parents. At the end of the study, 42 students (14-19 years old) completed the research, which was conducted at a private school in the city of Natal, state of Rio Grande do Norte (05º46´S 35º12´W).

Data collection was carried out during two weeks: the first one in the first semester of the school year (June) and the second during the vacation period (July). SWC and daily sleepiness were evaluated on both weeks.

For SWC evaluation, sleep logs were utilized (31), and for evaluation of daily sleepiness, the Karolinska Sleepiness Scale was applied (KSS) (32,33). The sleep log included questions related to bedtime and wake-up time schedules, sleep latency, way of waking up, frequency of naps, and time of naps. The Karolinska Sleepiness Scale is an analog scale in which the lowest values represent the lowest levels of sleepiness and vice-versa. In this study, the adolescents fill in the scale upon waking up, at 8:00am, 11:00am, 02:00pm, and at bedtime.

Comparison between sleep schedules on the five weekdays and the two weekend days both during the school period and during the vacation period was performed with the use of a dependent T-test. SWS was evaluated by comparing the standard deviation in bedtime and wake-up time schedules on weekends during schooldays and during vacation days by means of a dependent T-test. 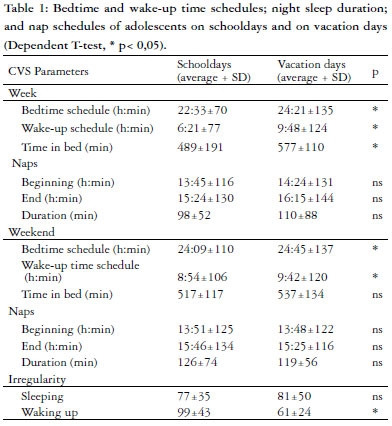 Figure 1: Actogram representing the sleep-wake cycle of an student during a school week (compact bars) and on a vacation week (intercepted bars).

The percentage of individuals who report waking up by themselves was greater during vacations than during schooldays (X2= 115, p=0.001). No difference in the way of waking up on weekends could be observed (X2= 1,49 p>0.05). 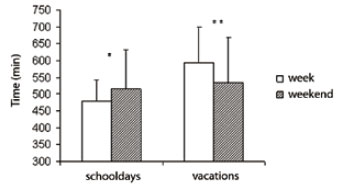 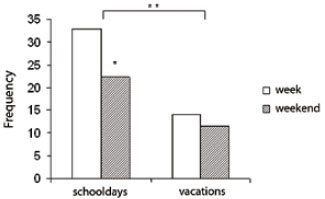 No difference with respect to the beginning, end, and duration of naps between the two weeks could be observed (t; p>0.05) (Table 1). 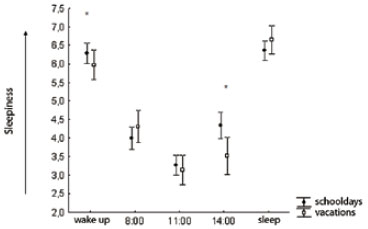 Figure 4. Sleepiness evaluated through KSS along the day on schooldays and on vacation days. (dependent T-test, * p<0.05).

According to Hansen et al. (29) and Crowley et al. (30), morning school schedules do have an influence upon the adolescents' SWC, leading them to sleep earlier and have shorter sleep duration. Irregularity in sleep schedules was maintained during the vacation period; thus, sleepiness cannot be attributed solely to partial sleep deprivation induced by school schedules. Daily sleepiness decreased during the vacation period as compared to the school period at wake-up time and at 02:00pm; on the other hand, no difference was observed on weekends.

During vacations, a bedtime delay and an increase in sleep duration on weekdays represent the expression of the biological rhythm, without any influence of school schedules. Thus, the adolescents wake up spontaneously, similarly to the adolescents observed by Carskadon on a study comparing schooldays with vacation days (5).

Nevertheless, freedom to "choose" bedtime during vacations does reduce irregularity in adolescents' sleeping schedules. In contrast to schooldays, during vacations, when their sleep period was greater on weekends, the adolescents slept more on weekdays. Thus, the pattern of reducing the sleep period on weekdays and extending it on weekends was inverted. It is probable that the weekend ceased to be the period when they compensated for sleep missed during the week; perhaps this has become the period when they develop stimulant social activities such as going to parties, navigating on the internet, or watching TV until late, a common practice among adolescents (20-23). With this in mind, considering that one of the main recommendations related to sleep hygiene measures is the maintenance of regularity in sleep schedules, it would be necessary to investigate the extent to which irregularity may be detrimental to the individual's sleep quality. However, in view of the adolescent's socio-cultural context, such measure may be difficult to implement in day-to-day life.

Even if adolescents maintain an irregular bedtime schedule, the increase in night sleep duration during the vacation period may have contributed to reduced sleepiness at wake-up time and at 02:00pm, as well as decreased frequency of naps. In healthy individuals, sleepiness levels show a daily pattern (32), with the highest values being observed at wake-up time, at the beginning of the afternoon (propitious moments for taking a nap), and close to bedtime. Nevertheless, partial sleep deprivation, common on weekdays and workdays, may raise the daily sleepiness curve, thus facilitating sleep episodes (33-35). On the other hand, during the vacation period, an increase in night sleep duration on weekdays was associated with a reduction in sleepiness levels at moments propitious to sleep and with a 50% reduction in frequency of naps.

Nevertheless, a change in school schedules should be carefully evaluated among each population (39), as it involves several sectors of the society, making its implementation difficult. Moreover, the change in itself may not be effective, as the students might take advantage of later school schedules by continuing to surf the internet, watch TV, or study until late at night (40). Even so, the possibility of planning bedtime and wake-up time schedules favors a reduction in sleep schedules (19,38) and an increase in its duration (19), as observed in adolescents who attend classes in the afternoon.

In the short run educational programs may help the adolescents acquire knowledge that might be utilized for promoting behavioral changes that favor sleep, as per what was observed in previous studies (10,25). In the long run, such knowledge might facilitate the school schedule changing process through a gradual and continuous enlightenment of today's adolescents, the adults of the future.

24. Van den Bulck J. Television Viewing, Computer Game Playing, and Internet Use and Self-Reported Time to Bed and Time out of Bed in Secondary-School Children. Sleep 2004;27:101-4.